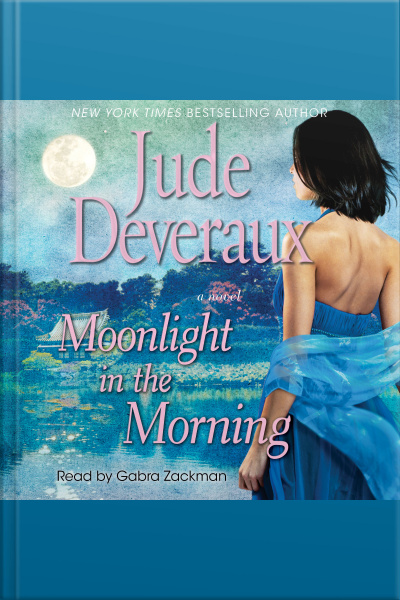 Moonlight In The Morning

Jecca Layton was coming to Edilean for the entire summer!

Dr. Tristan Aldredge put down the phone with his cousin Kim. At last something good was happening in his life! In the last weeks he’d begun to think that he was on a downward spiral that was never going to end.

His arm itched, and he did his best to use the coat hanger wire to scratch it under the cast. So much for medical school, he thought. All those years of training and what did he use for the incessant itching but a coat hanger?

As always, he tried not to think of what had happened to him a few weeks before. He’d been on his way to the airport when he realized he’d left his cell phone at home. Since he was the only doctor in a small town, he couldn’t risk being out of touch. He drove back home and came upon a robbery in progress. Before he knew what was happening, he’d been hit in the back of the head with a golf club and kicked down a hillside. So now his arm was in a cast, his father had come out of retirement to take over Tris’s practice, and Tristan had been told to “rest.” To do nothing. Let his arm heal.

This pronouncement had made him waver between suicide and murder. How was he supposed to do nothing? He couldn’t help but think how many times he’d told his patients just what his doctor had said to him. Over the years, Tris had put on his most sober face and told patient after patient to find something he/she could do with one arm or leg. To Tris, it had seemed like a temporary thing, so why so much complaining? But when he was told the same thing, he’d said that was impossible.

“I have patients. An entire town depends on me,” he’d said to his doctor.

“And you’re the only one who can handle it?” the man replied with one eyebrow raised. He had no understanding of Tris’s predicament and certainly no sympathy. Tris thought about running his chair over the man’s stethoscope—while it was in his ears.

His father had been worse. He’d come up from Sarasota where he’d been living in retirement and started complaining the second he entered Tris’s office—the office that used to belong to him. His father saw everything that Tris had changed and told his son that it should have been left the way it was. When Tris protested, his father told him to go home and rest.

“Doing what?!” Tris had muttered as he left.

He’d thought about getting out of Edilean for a while, but that hadn’t appealed to him. He liked being home, and besides, he had plants to take care of. And patients to see on the side, ones that his father wouldn’t know about.

Still, the prospect of the summer was bleak, and he dreaded it.

But then, Kim called to ask how he was doing. He’d refrained from telling her the truth, but he did manage to give a few sighs and she rewarded him with some sympathy. She’d then told him the wonderful news that her friend Jecca Layton was coming to Edilean to spend the entire summer painting. For the first time since he’d awakened to find himself down the side of a hill on his own property, knowing full well that his arm had been broken in the fall, Tristan began to perk up. But then, Jecca’s name always put life in him. He’d met her years before on her first visit to Edilean. She’d been a teenager then and Tris was a young doctor working under the rule of his father.

Kim’s parents had put on a party and invited a lot of the cousins to meet Jecca. There had been a house full of people, all of them having known each other a lifetime, so they were busy catching up with one another’s lives. Tris was the only one who noticed when Jecca escaped out the back door. He started to get her a margarita, but then remembered that she was Kim’s age—just nineteen. He got her a glass of lemonade instead and took it out to her.

“Thirsty?” he asked as he handed her the glass.

“Sure,” she said as she took it, but she barely glanced at him.

That she didn’t do a double take at his looks made Tristan blink a few times. All his life people had responded to the look of him. He’d never had trouble getting girls, as they came to him without his having to do anything. But this girl kept looking at the moonlight across the lawn and didn’t seem interested in Tristan’s extraordinary good looks. Until that moment she’d only been “Kim’s friend from college,” but that night Tris looked at her in her own right. She was tall, with a slim body that curved in all the right places. She had on jeans and a shirt that clung to her perfect shape, not outrageously so, but discreetly, and he liked that. She looked classy, elegant even. Her face was very pretty, with short dark hair that framed her face. She had green eyes that reminded him of the petals of butterfly orchids, and her little nose turned up in a way that made him want to kiss the tip of it. Her lips were perfectly formed, but right now there was a sadness about them that almost made him frown. More than anything, he wanted to take that sadness away.

“Yes,” she said honestly. “Kim has so many relatives that I—” Cutting herself off, she glanced at him. “Sorry. I didn’t mean to sound negative. It was nice of her family to give me this party, but it’s a lot to meet so many people at once. I apologize but I don’t remember your name.”

“No.” He was smiling at her, teasing.

“I shudder at the thought.” He set his drink down and leaned his elbows back on the low brick wall that ran along the patio.

Jecca turned to look at him, her pretty face slightly frowning, then she smiled, and when she did, Tris’s heart seemed to leap into his throat. Damn! But she was pretty. The moonlight played on her skin in a way that made it look like alabaster. “You’re a doctor. Like Reede.”

Tristan gave her his best smile, the one that had made many a woman look as though she were going to melt. But Jecca didn’t. She just looked at him in question. “Yes, I’m a doctor. I work here in Edilean.”

She tilted her head as she looked up at him. “Do you like being a doctor or did you do it because that’s what Aldredges do?”

Tristan wasn’t used to pretty women standing in the moonlight and asking him about his innermost thoughts. He wouldn’t be surprised to be shown a mole they were worried about, or for a woman to step closer in invitation, but someone asking about his life was a first. “I—”

“If you say you want to help people, it doesn’t count,” she said.

He’d wanted to take the seriousness from her, but he was the one to laugh. That was exactly what he’d been about to say. He took a moment to consider her question. “Would it make sense to say that I don’t think I had a choice? From the time I can first remember, I’ve wanted to heal things, make them better. Kids used to bring me wounded animals and I bandaged them.”

“Isn’t your father a doctor too? Did he help you?”

“No,” Tris said, smiling. “He was too busy with real people. But he understood. He said he’d done the same thing when he was a kid. My mother helped me. She got my dad’s old textbooks out of the attic, and together we learned how to make splints and sew up wounds. I think she probably asked my dad what to do, but it was nice for Mom and me to do it together.”

“I like that story,” Jecca said as she looked out over the lawn. “My mother died when I was very young and I don’t remember her. But my dad has always been there. He’s a great guy, and he’s taught me a lot.”

“You sound like you miss him,” Tris said softly. He couldn’t help himself as he stepped nearer to her. He’d never before felt so close to a woman he wasn’t related to. He wanted to take her hand and lead her into the dark, sit down somewhere, and talk the night away. “Do you—?” he began but cut off when the sliding door into the house opened.

“There you are!” Kim said to Jecca. “Everyone is looking for you.” She looked from Tris to Jecca in speculation, as though wondering if anything had been going on.

Jecca took a step forward, then glanced back at Tristan. “It was nice to meet you. I hope I don’t need to go to your office,” she said, then followed Kim inside.

That had been the last time Tristan had seen Jecca. He’d wanted to invite her and Kim to his house, but a patient had had a blood clot in her leg and had to be airlifted to Richmond. Tris had gone with her and when he got home, Jecca had returned to New Jersey. He knew without being told that in her memory he’d been relegated to “one of Kim’s cousins.”

He told himself it was all right, as Jecca was just nineteen and by comparison at twenty-seven, Tris was an old man. He’d had to content himself with trying to finagle information out of Kim. He’d always acted as though it meant nothing to him, but he asked Kim about her often. “How’s your friend . . . What was her name? That’s right. Jecca. How’s she doing now? You two have any new boyfriends? Anything serious going on with either of you?” He’d posed all his questions in an avuncular tone, and Kim had never seemed to see what he was actually asking.

She said Tris was a good friend for even remembering her college roommate, and an even better guy for listening to her babble on and on about whatever they were doing in school. Kim told him how Jecca’s father nearly drove her insane because he kept such rigid control over her, and how Jecca was doing with her painting, and all about any boyfriend that Jecca might have. Kim talked about their other roommate, Sophie, and about her own life, and she never seemed to notice that Tristan always maneuvered the conversation back to Jecca.

Every time Jecca had returned to Edilean to visit Kim, Tris had tried to see her. But every time something had come up, some emergency that as a doctor, he couldn’t overlook. On one visit, he’d been in France on a rare vacation. That he’d been there with another woman hadn’t been important to him.

One time when Tris was in New York he’d stopped by the art gallery where Jecca was working, but she’d been in New Jersey at the time. Once when he was at a conference in New York, he rented a car and drove up to see Layton Hardware, but Jecca wasn’t there. He’d had a glimpse of her father, who seemed to be as wide as he was tall and all muscle, but there wasn’t anything Tris could think of to say to him. That he was pursuing a girl he’d met when she was just nineteen? Joe Layton didn’t look like a man who would greet those words with a smile. Tristan had left with a new toolbox and driven back to Edilean.

But now it seemed that...